Cheer for Ellie Greenwood at Comrades

Help us cheer for Ellie Greenwood! 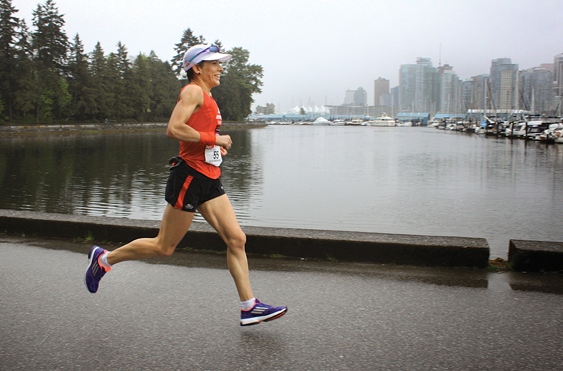 While many of us take a well-deserved break from our running shoes this month, second place Women’s BMO Vancouver Marathon finisher Ellie Greenwood is already preparing for her next race—and not just any race, but one so arduous that training for it required Ellie to adopt a different approach to running our event for the second time this year.

“I’m going to run hard and put a solid effort in [at the Marathon], but I can’t kill myself,” Ellie said to The Province at the BMO Vancouver Marathon Media Luncheon. “I don’t want to be flat out on the finish line. I’ll save that for Comrades.”

In just nine days, the 35-year-old from North Vancouver will compete in the Comrades Marathon in South Africa—an approximate 89-km trek through the province of Kwazulu-Natal that’s labeled as the world’s most prestigious and largest ultramarathon.

On June 1st beneath a hazy South African sky, Ellie and roughly 16,000 other qualified runners will lace up in the city of Pietermaritzburg and traverse five sets of hills (known as “The Big Five”) before arriving in Durban, the largest city in the province and home to the busiest port in all of Africa.

“It’s a super race,” Ellie told The Province. “You go through the villages and there’s supporters all the way along. The whole thing is on South African TV. There’s a lot of hype and fun around it.”

From Vancouver’s comfortable distance, the hype, scenery, and smiling supporters at Comrades seem to envelop the race with a rosy glow—but actually running roughly 89 kilometres through rugged South African terrain in under twelve hours (that’s the course time limit) seems the opposite of “fun”, doesn’t it? Not for Ellie, who views the race as a

highlight of her running season. Believe it or not, Ellie placed second in the world-famous race in 2012—the same year that she placed first at the Western States 100-miler and first in the BMO Vancouver Marathon. After suffering an injury that held her back from most competitions in 2013, Ellie seems eager to return to Comrades in 2014 to challenge Russian twins Elena and Olesya Nurgalieva (champions for the past eight years) for the win.

“I would love to win but it’s a big ask,” she said to The Province. “It’s very competitive.”

Originally from Fife, Scotland, Ellie came to Canada in the 1990s to study and ended up sticking around. Soon she’ll receive her Canadian citizenship. She began running in her early twenties, when a coworker encouraged her to sign up with a local run club as a way to meet new people and make friends.

Ellie remembers running farther and farther each day, eventually becoming hooked and relocating to North Vancouver, where the trails are closer and training options are vast, dynamic, and challenging.

“I love it here,” she told the North Shore News in the days following our event. “Six or seven days of the week I’m out running…That’s what I want to be doing most days of the week.”

A lover of almost every distance, Ellie has said that she doesn’t exactly “specialize in marathons.” All the same, the BMO Vancouver Marathon was thrilled to have her back again this year to compete alongside over 70 other elite athletes.

Over the next few days, we’ll be posting on our Facebook and Twitter pages about Ellie and the upcoming Comrades Marathon.  We encourage you to click “like” or post a motivational sentence or two to help cheer Ellie all the way to the finish line on June 1st!